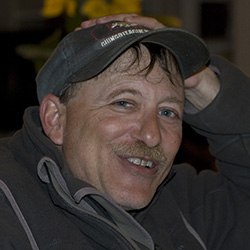 It is with great sadness that I report the passing of our good friend, Neil S. Rothschild (1956-2019). Neil, one of the great scholars of Connecticut Coppers, passing so closely after his longtime collaborator, Robert Martin, makes this all that much more difficult and sad. Neil was a renaissance rnan. He pursued so many directions in life, and in every one he achieved a level of subject mastery and skill. Perhaps that is why over the last few decades we spent so much time together; there was always something fascinating going on with Neil.

Besides his enormous contributions to numismatics, Neil founded and led his own software company for
decades. He was a great birder, taking some of the most amazing shots ever (https://www.pbase.com/nrothschild). Neil was also a seriously accomplished astronomer, specifically an astro-photographer
( https://pbase.corn/nrothschild/astro). I can remember one night in particular when he figured out the newly discovered Cornet Lulin would be streaking by the New York area. We set up out in my backyard on a cold winter night around 1:00 am — telescopes, computers, cameras, charts, infra red — and several curious neighbors looking out their bedroom windows! Neil caught Lulin just as it was streaking by Saturn with its rings on display. The shot was later featured in Sky and Telescope!

Or the night he caught every aspect of the total eclipse of the moon. Or that one winter that it was so cold that for the first time ever it froze the lagoon in my backyard “almost” solidly. Neil convinced me to go outside with him and take a walk on it. Jack Howes was having no part of it, so he took the picture. But later, Neil convinced Jack too (how many times will we get the chance he said?!?!?!?). And while Neil was everyone’s go-to in the Colonial coin photography world for a few decades, he was everyone’s go-to for photography in the Renaissance Fair world, particularly in jousting! I think one of Neil’s proudest shots was capturing two mounted jousters, heading full speed at each other. Neil caught the two of them making direct tip to tip contact as the lances exploded into a shower of splinters
(https: //pbase.com/nrothschild/tip2tip ). I challenge you to find a Renaissance fair that does not feature one of these images. Neil was also a serious scuba diver, but for health reasons, gave it up in favor of skydiving! So while we have not seen as much of Neil in the past 4 or 5 years as we used to, he was a busy man.

I first encountered Neil in numismatics “virtually” on the old dial-up Comp U Serve Coin Chat Forum that used to meet on Monday nights when I was still collecting Large cents and was just transitioning into New Jersey Coppers. We always seemed to be the first on and the last off and even then started a little New Jersey vs. Connecticut Copper rivalry. Honestly, I would have never imagined back then, living in California, Neil in Baltimore, chatting
“online” that we would have ever end up becoming the friends we did. But as we both became more immersed in our respective specialties, Neil had every bit as much passion for Connecticuts as I did for New Jersey Coppers. And he soon set about building digitally what Robert Martin had been doing in analog for the past twenty years!

It is no wonder they would soon meet and collaborate for decades, helping to build each other’s massive Connecticut resources for the hobby. But Neil brought one more thing. Like everything else, he would get to know virtually every aspect of everything he got involved with. He understood digital cameras and how they interfaced to a laptop and rendered a digital image better than anyone I ever met — in Silicon Valley, Tokyo or otherwise. So who else to figure out how to take exact real image shots of dark flat metal discs than Neil?

I remember one week I came back to New Jersey from San Francisco with my brand new, one of the very first, hot off the assembly line, 5th Gen Picture iPods. Neil and I spent the following week taking digital photographs of my collection and figuring out how to download them into my Mac. Transfer them into to the old iPhoto, straining all the technology and very limited memory of that iPod, downloading the images in there and taking my collection in my shirt-pocket to Baltimore. Quite a stir!

Neil was the Colonial collecting community’s go to photographer. I would bet more than one in five non-auction house colonial coin pictures in any publication you have seen over the last twenty years was taken by Neil.
Neil was that good. Unfortunately, demand was too high, and Neil was too much of a perfectionist. So output could never keep up with demand and from time to time it frustrated a few. It frustrated Neil too. But how often does perfect come free? We all received so much from Neil.

A brightly burning light extinguished far too soon. But a life well lived. Rest in peace my dear friend.

It was very sad to hear that Neil had died. I had not seen him much in the last couple years as he had become inactive in numismatics.

I first met Neil at Roger Siboni’s about 15 years ago. Neil was taking pictures of coins with what I thought was very interesting photographic equipment. He was more than happy to show me what he was doing and tell me why he was using that particular equipment — Nikon. He was a life long Nikon user. I still remember those long discussions! Neil taught me all I know about macro photography. But Neil did more than just coin photography. He was an amazing bird photographer. Among the best I have ever known. I started using Nikon digital cameras and lenses shortly thereafter. Neil used a 105mm macro lens and a monster light stand for coin photography but he could only get that equipment from one place to another by driving. He claimed that was not really any imposition as he did not like to fly. Which amazed me when at some later point he showed me images of him sky diving!

Sometimes at Siboni’s Neil would bring his telescopes — two Celestrons. And we would be up late into the night using them.

Neil will be missed by everyone who knew him.