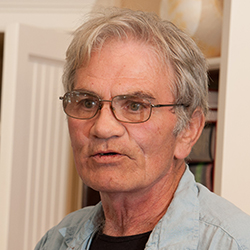 Robert Martin was a avid collector during several numismatic generations. He started with Large Cents in the
1960s and 70s as a member of Early American Coppers, Inc (after serving his country in Vietnam), and always prided himself as having a very early EAC membership number. As prices for Federal copper grew, he became an early enthusiast of Colonial Coins, and in the 1970s and 1980s began focusing on Connecticut coppers (and Massachusetts Silver). He had many peers in the early days of the Colonial Coin Collectors club (C4) organization who sought his opinions, knowledge and friendship.

In the 1990s and 2000s he cultivated and taught a new crop of colonial collectors and researchers (myself included), particularly those focusing on his favored Connecticut coppers. Robert was a strong advocate of “color & surfaces” when choosing his coins, and was a master of knowing Connecticut copper “condition -rarity”, focusing on the best pieces of each variety that only those with knowledge depth could identify. Robert was always pleasant, fair and willing to talk your ear off if you let him. I considered him a great friend and hobby mentor .. and he will be greatly missed. Robert was an EAC and then a C4 fixture. His areas of expertise were Mass silver and Connecticut coppers, and he was extraordinarily knowledgeable in both areas. He was my age, and we were both in the Army at the same time in the late 6os. However, he went to Vietnam and I went to Germany. I used to call him up whenever I found a rare or scarce Connecticut, and I don’t think our conversations ever lasted less than 90 minutes–and I am a pretty quiet guy. He kept meticulous records on appearances all 360 or so Connecticut varieties.

Our talks would begin with me telling him what I found, where I found it, and how I graded it. He would then tell me how many examples he was aware of if there were fewer than 30 or so examples known to him, and where he thought my coin fit into the series. And then he would be off with wonderful stories of Hall, Miller, Canfield, Barnsley, and others who collected Connecticut coppers. Absolutely fascinating stuff. I truly regret I did not call him more often and that I was not able to tape our calls. He was a wonderful person and I will miss him.

I will miss my friend Bobby very much. Early in my days as a dealer we would always compare what we observed as far as condition goes, to make sure we weren’t seeing things as too nice. I always took Bobby’s eyeball observations as a positive validation of my own eye.

I knew Bobbie before for a long time. He was teaching me about colonial coppers. He took me into the city to view coins being readied for auction. It was at Stack’s that he introduced me to my husband-to-be Anthony Terranova. It was Bobbie’s love of Connecticut Coppers that drew me to them. He was scholarly and patient. A good friend. He will be missed in the coin world as well as mine.

This week Colonial numismatics lost one of its brightest lights and best of friends. Sadly, Robert Martin passed away last Thursday from cancer complications and all of us in the Colonial world will miss the tremendous impact he had on each of us whether direct or indirect. While Robert was widely known as the master of Connecticut coppers for our generation, maintaining meticulous records of virtually every Connecticut copper that passed through any auction house, fixed price list, or major collectors hands. His interests and knowledge spread much further and wider than what he was so well known for. He was a serious student of Massachusetts Silver, with a particular interest in Feversham cut coinage, Regulated Gold, painted die varieties, Machin’s Mills coinage, Vermont coppers, numismatic literature and the list goes on.

Robert was an ANS Fellow from the Bronx, and in his own very unique “Christopher Walken” gait and style of talking he would always be easily picked out on a bourse floor or in an auction room. He had a ready smile and quick wit, and walked through life sharing and absorbing every bit of Colonial numismatic information the world, but particularly the New York metropolitan area, had to offer. The list of who he consulted or would consult with is just too long to enumerate, but here are just a few of those passed: Walter Breen, Gordon Frost, David Sonderman, Steve Tannenbaum, and Mike Ringo. And among those still with us, Michael Hodder, John Kleeberg, Tony Terranova, Richard August, David Menchel, Mark Borkhardt ……. .I could go on. But suffice it to say, very few Colonial Connecticut catalogues, articles, books, transactions, attributions, authentications would ever happen without consulting Robert.

On a fairly modest budget, he assembled one of the finest collections of choice Colonial coinage just through his tremendous knowledge, uncanny memory, exquisite taste and amazing library. And on the latter score, Robert had a nose for which sales would survive the test of time. So while some of us would save one Norweb or EAC 1975, Robert would keep 20. At one time he had five Crosby’s, a half dozen Halls, a dozen Wurtzbachs, a closet full of complete New Netherland runs, a dozen Sterns and Ropers. Robert was always the “go to guy” for someone new to the hobby trying to quickly ramp up their library.
Robert, we will miss you.

We got word that Robert had passed mid day Thursday at our Colonial Coin Collectors Convention in Baltimore. Robert had told me about a month earlier that he did not think he could make it this year. So, I knew then his health was seriously bad, as this gathering was one of the highlights of his year.

I’ve known Robert for the better part of twenty years and considered him a great friend. It is sad to think I will never speak with him again. I have many memories of the stories he would tell. Robert had talked in recent years of moving from his apartment in the Bronx to a condo outside the city but I don’t think his heart was in it. He was a New Yorker.

Robert was an avid collector of Numismatic Literature (that had at least some Colonial numismatic content). He was meticulous in his research and has a core library of Connecticut state copper research that I hope survives. He never embraced the digital world in any serious way, so this material is all “analog.” He cut and pasted and typed his notes for all his research into binders. Many, many linear feet of handcrafted work.

Robert collected numismatic catalogs also. And since the mid to late 1970s he attended most auctions with colonial interest that were held in New York City and many were. He would leave with many leftover duplicates. One of my favorite stories he told was of his “cave-in” room. “What, I asked, is a ‘cave-in’ room”? He told me he had dedicated one room (more a large closet I believe) in his apartment for modern catalogues. One day he left the door open and a couple of his cats got in and chased each other over the stacks of catalogs, tipping them into the middle of the room and creating a “cave-in.” Robert had closed the room off for over a decade but had been recently trying to restore “order.” I don’t know if he finished that task. I always picture opening the door to that room and still seeing the yellow crime scene tape crisscrossing the doorway!

On a last note Robert created his own numismatic collectibles. Rather than bookplates, Robert placed in every item he created or collected, one or more stamps or embossing. I have no idea how many different stamps he had but I have seen at least half-a-dozen. A couple are pictured below.

I have also attached a few pictures of Robert from a few years ago. The pictures from Roger Siboni’s home in Mantoloking, NJ. Thanks, everyone. The above photo was passed along by Randy Clark, who helpfully added the arrow to point out Robert Martin. It was taken at a C4 Boston Convention for a contrived “Midnight Sale” in one of the hotel rooms, late at night. I know some of the attendees and have a roster provided by Randy. But for fun, who can name everyone for us? Better yet, could any of the surviving attendees tell us more about the event? -Editor