How many people have you run across in life that you can truly say, with unwavering conviction, now there goes a person who EVERYONE has nothing but a kind, appreciative, warm hearted word to say about them?

I have known a lot of people over the years, numismatically and otherwise. And across the many endeavors I ventured out upon with Syd Martin, I found him amazingly unique in that way. There truly wasn’t anyone that did not have a kind word to say about him. One of the most decent, intelligent, generous, funny, warm hearted people I have had the good fortune to know and consider a close friend in all my days.

Syd was an MIT graduate. One of the ways Syd worked his way through school was scouring flea markets for antique pocket watches and reselling them to antique and watch dealers in nearby cities. Up until this last year, Syd still scoured flea markets (finding things like his R-7+ Vermont Copper Ryder 37). He remained one of the largest pocket watch collectors and top authorities on the subject until his last day.

He and his son put together an extensive collection of Coin Silver. He collected maps, paintings, books, early American Silver and on and on. Syd was not just a serious author, but first and foremost a bibliophile and we built our libraries together and often in deep consultation with one another. Frequently we traded to supplement one another’s collection.

And at the ANS Huntington Award Ceremony in November 2020, the rest of the world found out his passion for 1932 Washingtonia. I still remember the ANA convention we zig zagged an afternoon and evening chasing down original 1932 Washington Quarter Cast Molds.

I knew Syd since the early days of C-4, but we started to become closer friends just before the Stack’s O’Donnell Sale ( early 2001). We quickly found out that we shared business and investment interests, similar family challenges, shared so many likes and dislikes. But most interestingly, had this peculiar fit with one another in collecting.

We both applied a lot of analytics to our collecting. We were both playing a long game. And both felt that we were in this for the enjoyment, passion and accomplishment. And if we overspent, or never fully recovered some of our purchases, in the words of Sheldon, never spend more than you can good naturedly afford to lose. Or as Syd used to say, think of it as “green fees”.

But all this instructed a collecting journey we travelled together. Syd always envisioned completeness. And sought out advice on building his library to completeness — what might that entail — from Evelyn to the latest Machin’s Mills publication by Howes, Rosen and Trudgen. We would talk endlessly about what it would take for each of us to achieve our goals and speak in terms of decades. I must say, I felt some sense of shared accomplishment when Syd crossed the incredible, never to be equaled, 350 Connecticut Copper Variety/Mule mark recently and the 10 Higley Copper variety mark a short while ago. I shared that journey with him, even bidding on a few for him over the years (as he did for me). 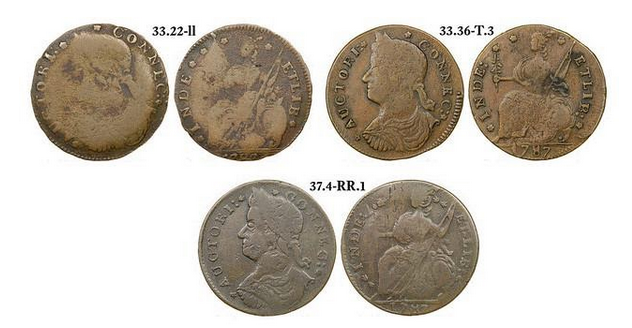 We also knew that no matter what we spent, there were always more coins to be had than we could ever acquire. All said, we enjoyed the hobby immensely together and collaborated far more than competed. We purchased several collections together large and small. We pursued things like the granular detail of Washington Inauguration button manufacturing. Which ones were period and true varieties and which were not? I am not sure with whom I will ever again get to discuss the inner workings of Albert on early American uniform buttons.

Syd was a key member of our Colonial field trip posse. We went on too many to recount. But some favorites were a few days up to New Hampshire to visit Stacks/Bowers and QDB and team to leisurely lot view and study Norweb’s Washingtonia. Or several days in Colonial Williamsburg to see everything no one sees behind the scenes with Eric Goldstein, Leo Shane, and Ray Williams. If not for Covid, we had planned a field trip to South Carolina early last year to see the location and ground works for our favorite Battle and General in the American Revolution. The Battle of Cowpens and Daniel Morgan (the movie The Patriot), that we each own a rare bronze Comita Americana Medal for that we respectively purchased in the 2019 Adams Sale. A sale we both attended and discovered as we were bidding that we had been both ejected from our Baltimore convention hotel rooms and had to scramble for a place to stay in a sold out city after the auction that night!

To meet Syd, one would never know of his incredible accomplishments. His genuineness and modesty were his most endearing traits. And he always had a sense of gratitude for his good fortune which gave him a passion for giving back. He did so financially in so many ways, but more so with his personal time. Something that is far more difficult to give. I certainly remember that in some of the most challenging times for the ANS, there were few people willing to undertake bold initiatives to turn the fate and fortune of that Institution around. But Syd stepped in with both feet and helped us get through some very choppy times up to and through the financial crisis of 2008. And when my tour of duty was done, there was no better champion to guide the ANS through its next decade at Hudson Square than Syd. A decade culminating not only with his successful Presidency, but receipt of the prestigious Huntington Award.

Syd was a force of nature when it came to numismatic writing. While we obviously cheered, aided, supplemented each other’s research over the years, my contributions are small compared to Syd’s. I can remember so clearly how he approached each book and project. It had to be incredibly vast and complex and honestly, a subject given up for lost. But interestingly, every book actually started with Syd ruminating about purchasing a major collection in the area in which each of his books was eventually written. He would come across vast variety collections in one area or another, and that was really the draw for that collection purchase. A new book! That was always the starting point to examine every variety so that something could be written to bring order to chaos.

In addition to everything else, Syd has assembled one of the finest numismatic libraries in the country. He was on the Board of NBS and a member of the Attinelli Fellowship. I sold Syd his first set of AJNs and CNLs. I had a bit of a head start, but Syd got the bug and soon we were building together and pursued very similar holdings. We shared bookbinders and bookplate makers. But I can remember one biblio moment in particular. Syd’s brother Tim, through some numismatic coincidence, through Tim’s law firm in Denver, somehow ended up handling Walter Breen’s widow’s estate. The estate included Walter’s numismatic library that Syd purchased and had shipped to his office in Doylestown. There were about five large three by three boxes. I was there when they arrived. They had been packed away since Walter’s days in Berkeley and not opened since. Well, upon opening the boxes, it unleashed an overpowering leafy odor. By the time all five boxes were opened in the office, it was like being at a Grateful Dead concert.

But of all the things I will miss about Syd, I will miss my “old school” collecting best friend. Numismatics is an old school hobby at its finest. Filled with ritual, traditions, friendship, scholarship, education, community and philanthropy. Syd considered himself lucky to be able to enjoy numismatics as he did. And we really indulged and immersed ourselves in the hobby together. We studied collectors of the past and saw what they did. From bookbinders, to two by two flip engravers, field trips, ANS and C-4 leadership work, coin photography and photographers, sponsoring things like digitizing the colonial coin images at the ANS for MANTIS or the Robert Martin Notebooks at the ANS and on the Newman Portal (along with Anthony Terranova). Negotiating collection acquisitions. And doing coin shows the old school way. 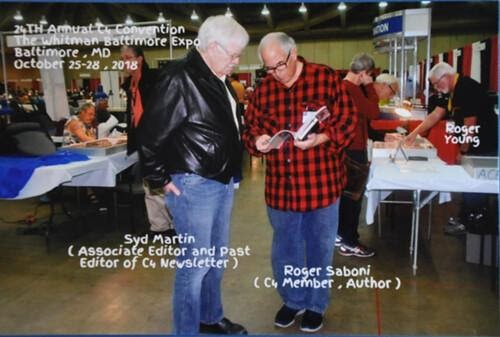 There were so many coin shows and auctions. But I think one of our favorite rituals were coin shows in Philadelphia. Coin shows in Philadelphia always have a colonial flavor. It was an easy drive for Syd from Doylestown and me from New Jersey. We would always stay at Syd’s very elegant and Mainline Philadelphia Union League Club. We would need to bring suits and ties for dinner and evening drinks while there. We would come mid-week and stay through the weekend. Maybe plan a side field trip to visit the Ben Franklin Museum to do some research on maybe Nini plaques. We would enjoy every minute of the show spending time with all the collectors and dealers present that we knew. Sometimes together, sometimes on our own. Usually attend whatever auction is going on and usually each go home with something we were proud of. Then go back to the club, dress, have dinner and meet a few more collector friends at the Club cigar bar and dissect the happenings of the day. I will greatly miss my good friend Syd Martin.

I feel some sense of goodness and peace in Syd’s passing though. I know that he moved on feeling a great deal of personal accomplishment in achieving his major collecting goals, particularly 350 Connecticut varieties/mules. His writing goals with his four books, the C-4 Newsletter, and the Huntington Award. That he was genuinely respected by his collecting friends for his hard work and knowledge that was earned, not bought. But most importantly, that he was truly liked in numismatics as a friend and peer. He was so touched at the very end that all his friends in C-4 saw fit to name their Numismatic Author’s Publication Award after him. He was awake and in good spirits the last few days before passing and left with a smile.

Syd, you were always too modest to fully understand how we will all miss you. 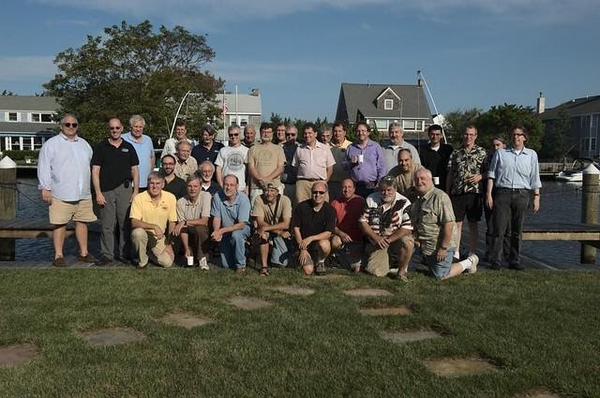 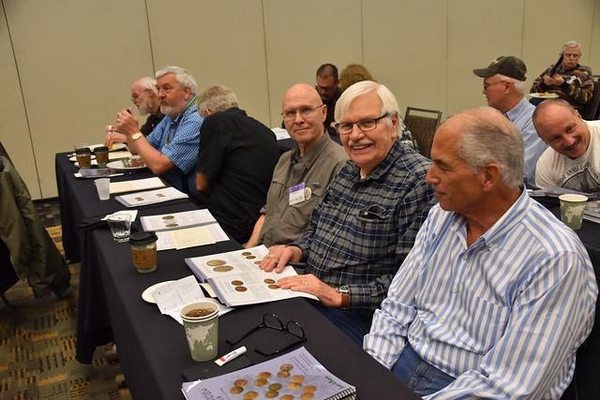 Press Release: The ANS Mourns of the Loss of Sydney F. Martin (http://numismatics.org/martin-obit/)