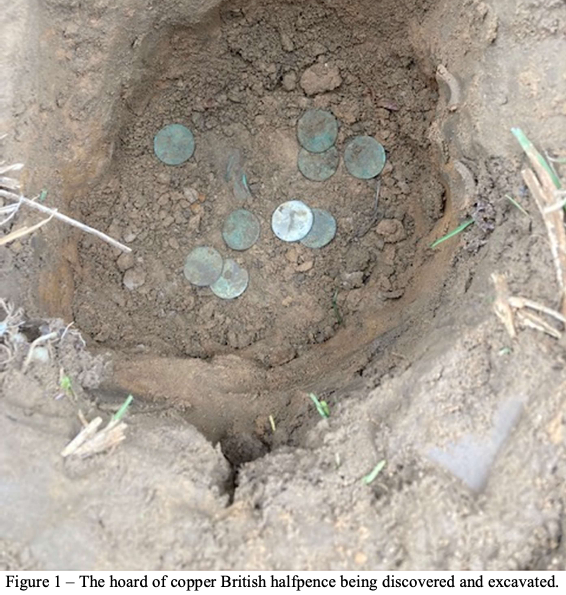 Though tension exists between metal detectorists and history-oriented archeologists, many important colonial era artifacts from sites that are now covered with malls and parking lots would never have been recovered and preserved without detectorists having intervened. High on the list of commonly found colonial era artifacts are coins and tokens with over 1,000 having been found in the Burlington County, New Jersey area by one of the authors (WS). However, metal detectorists typically only find a single coin at a time and thus it is a fascinating exception to find multiple coins in a single dug hole. Far rarer is finding a formal “hoard” of colonial era coins in the United States, whether by detectorists or otherwise. Some of these special hoards that have been both found and reported include an accumulation of 1700s halfpence washed up onto the beach near the southern Delaware, caused by the wreck of the Faithful Steward, a Pennsauken, New Jersey, halfpence hoard found in a building wall, a hoard of 1699 cast counterfeit William III halfpence found during the Route I-95 excavations, and the large group of coins found in Castine, Maine. Therefore, due to the rarity of hoard finds and the lack of follow-up publications of their discoveries, the authors felt it important to report on the recent metal detecting discovery of a hoard of British halfpence at a farm field site in Burlington County, New Jersey (Figure 1). – Read More –